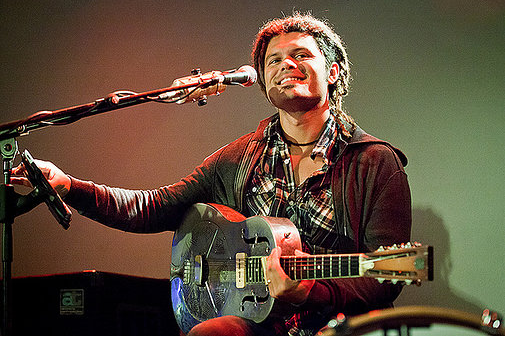 With special guest Ronny B

Renowned for the most incredibly, thumping live shows to come out of single human being, Ash is super excited about being back on the stomp box and reaffirming his decade long reputation as being the loudest one-man-band around.

Hot off the stomping, hairy heels of Ash’s GARGANTUA album release and tour with Scott and Andy from The Living End, Ash is returning to the pavement as the lone troubadour, to pound his way up and down his favourite haunts. Renowned for the most incredibly, thumping live shows to come out of single human being, Ash is super excited about being back on the stomp box and reaffirming his decade long reputation as being the loudest one-man-band around.

During Ash’s time with Scott and Andy – one of the country’s most skilled rhythm sections, he was forced to step things up and do something he’d never done before – practice! The excitement of the challenge – the fear almost of playing with two such musical entities – spawned in Ash a passion for musical self-betterment he hadn’t felt since that all consuming, all too common teenage obsession of wanting to become the greatest musician in the world. Whilst Ash holds no ambition so high and haughty these days, his focus now is to experiment with things he previously may have shrugged off as being too hard – the result: a braver, bolder, more bombastic Ash Grunwald than ever before….who also now plays the harmonica….

Weaving this tour in and around writing and demoing his forthcoming album is the best way to see the new tracks build on the stage. Win/ Win for artist and punter.

With special guest: Ronny B was born in in the Comox Valley and lived on one of the Discovery islands called Read until moving to Cumberland. Ronny previously worked as a carpenter and now enjoys being a treeplanter/musician. He has played in numerous groups locally here on Vancouver Island, mostly at hall shows, house parties and bar shows with “Kilink & Polish”, “Better than Dead”, “Killed by a Bear” and most recently “The Rhythm Rats”.

Ronny B started playing Blues when he inherited his Father’s 1960 Gibson. When he is doing a solo show, watch for his home-made percussion box, which was built from the guts of a bass guitar, a wooden box and a license plate and is run through a bass amp. Ronny B toured last summer with Annie Becker starting at the “Edge of the World” fest on Haida Gwaii and went through southern Alberta BC. He has recently recorded a 3 song demo featuring the Rhythm Rats and 3 singles solo this Winter with ‘Hewson music’.