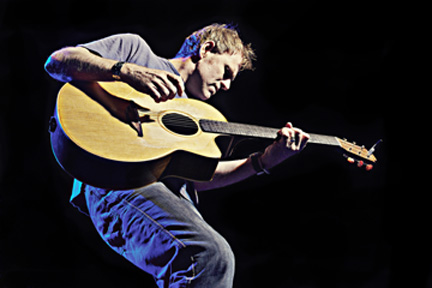 Martyn Joseph is a performer like no other. Shades of Springsteen, Knopfler and Dave Matthews there may be – but he stands in his own right, built on a reputation for giving what thousands have described as the best live music experience of their lives.

One of acoustic music’s most arresting artists, the Welsh singer songwriter has been in demand on both sides of the Atlantic for over two decades. Martyn’s 25 year career has embraced some notable achievements including 5 Top 50 UK chart positions, with such songs as “Dolphins Make Me Cry,” “Working Mother” and “Let`s Talk About it in the Morning,” and appearances and tours with, amongst others, Suzanne Vega, Marc Cohn, Joan Armatrading, Runrig, Clannad, Chris de Burgh, Art Garfunkel, Jools Holland and even Celine Dion and Shirley Bassey. He has won fans everywhere with his uncanny fusion of material –feisty, pull no punches big issue numbers alongside stripped bare love songs.

Martyn’s particular strength is in the lyrical narrative of his songs, be they contemporary protests against injustice and inhumanity, a musical psalm to the fulfilment and fragilities of love, or a piercing précis of social history, “It’s the song that can soothe, explain or even in a small way save us.” In this manner he carries on in the tradition of the six string balladeer as both catalyst and interpreter of our raddled and rewarding times, our personal and communal stories sung out loud in the spirit of Woody Guthrie, Ewan MacColl, Hank Williams and Bruce Springsteen.

Under Lemonade Skies released October 2010 is the album that Martyn Joseph has always wanted to release. It takes his trademark “one take” up close sound and adds startling textures, stunning instrumentation and expressive vocals that will stop you in your tracks.

Always charming, sometimes alarming, Martyn Joseph is a unique songwriter who digs deep and delivers an ultimate, life affirming message. One of the most unusual and compelling performers you are likely to encounter.