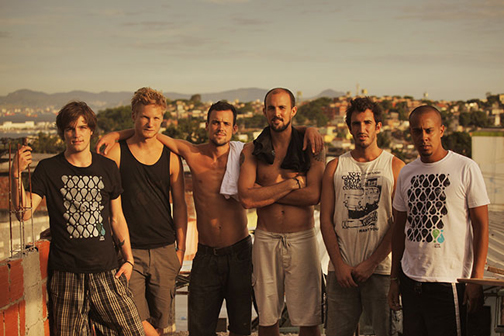 Tickets available at Bop City, the Waverley Hotel or online at www.cumberlandvillageworks.com

Come welcome back the Boom Booms to their home away from home!

The Boom Booms are a Vancouver-based six-piece rock-pop band. Since their 2007 launch, The Boom Booms have built a loyal fanbase that stretches across generations. The video for their feel-good party anthem, “When the Night”, reached #6 on the Much More Music chart in 2008 and was optioned for an episode of 90210. “Delivered”, a surreal banjo ballad that conjures up images of a jungle river baptism, garnered an award for Best Roots Song at the Just Plain Folks Music Awards in Nashville.

In 2011, The Boom Booms released their debut album ¡Hot Rum! This album, along with their strong live performance and incredible stage presence, earned the sextet a spot in the 2011 Peak Performance Project, BC’s most prestigious contest for emerging musicians. They went on to win second place and picked up a cash prize of $75,000.

Since then, The Boom Booms have wrapped up a successful tour of Brazil, which included sold out performances in both Rio de Janeiro and Manaus, playing for one thousand people in the heart of the Amazon. While on tour, the band fell in love with the Brazilian culture, music and people. They created a series of videos to raise awareness for the Belo Monte Dam in the Amazon Rainforest that is destroying and displacing a huge number of locals and causing an ecological disaster.

The Boom Booms recently performed in front of thousands of fans at the 2012 TD Vancouver International Jazz Festival and took part in Sarah McLachlan’s Voices in the Park concert in September.