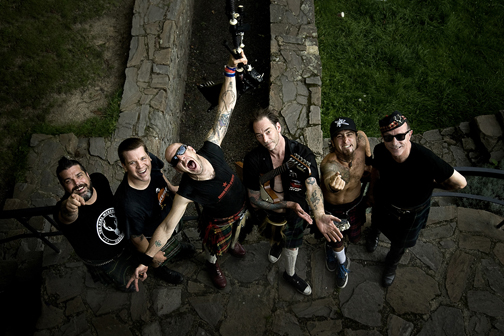 Celtic punk at it’s best,,, this band has been packing dancefloors for over 15 years.
with special guests: East End Radicals

THE REAL McKENZIES are not just a band. They are an unstoppable touring machine. A road-hardened crew of traveling minstrels, entertainers and vagabonds on a never-ending quest for good times.
For the past 20 years, this ferocious gang of miscreants has been captivating audiences around the globe with their addictive, uncompromising and undeniably heartfelt music. Featuring a diverse and insanely talented roster of musicians, The Real McKenzies draw on both acoustic and electric instruments to blend a potent concoction of classic punk, rock n’ roll, hard folk and traditional Celtic influence. Anthemic guitars and soaring bagpipes play off each other as Paul McKenzie spins yarns of times long past and regales with tales of endless drunken revelries. Blistering punk rock boot stompers stand alongside passionate singalong ballads while good times and joyous camaraderie are all the order of the day.

And now they’re baaaack… Westwinds is packed to the brim with roaring, rollicking and epic tales that shanghai the listener on a thirteen song, sea-tossed journey through the wild and wonderful world of The Real McKenzies. Recorded over several months at Crabapple Downs by the phenomenal Steve Loree, Westwinds is a sonic shot of deliciousness delivered straight to your ear holes. From the unapologetic raised middle figure salute of “Fool’s Road” to the hook-laden tongue-in-cheek “My Luck Is So Bad” to one of the most poignant and blood-pumping renditions of “Barrett’s Privateers (Stan Rogers)” that you’ll ever hear, this killer album is set to become an instant classic in the collections of both new and diehard fans alike. Much like a fine single malt scotch, The Real McKenzies only get better with age.

“The Real McKenzies are the rare outfit that improves with every album.” – Punknews

East End Radicals is about playing punk rock music the way we hear it in our heads. We write songs about the way we see the world. We want people to see that were having more fun than anybody when we play live. We are eager to play as many shows as we can. There are so many good bands out there and we want to be a part of that. REVIEWS: “Quebec punk group East End Radicals is a little like Anti-Flag, but with more pep. Actually, maybe The Casualties are a better benchmark, there’s certainly more a streetwise sense to them…their debut four track EP, Straight Out The Gate, is a solid piece of punk rock, and fantastic starting point for a relatively new group.” – ThePunkSite.com