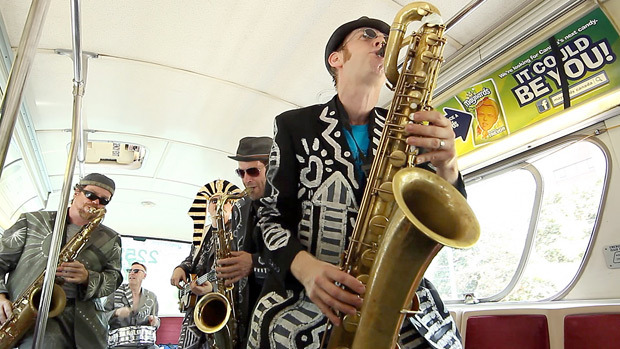 Legends of jazz funk touring the planet with zany showmanship and wicked chops.

The Shuffle Demons are a high-energy Canadian band that blends virtuosic jazz and funk playing with eye-catching costumes and over the top stage antics to produce an incredible show. A hit at festivals all over the world, the Shuffle Demons are a crowd pleasing, full-on musical group that backs up wild stage antics with phenomenal playing by some of Canada’s most talented musicians.

The Shuffle Demons first broke onto the Canadian music scene in 1984 with an electrifying musical fusion that drew in equal measure from Sun Ra, Charles Mingus, Run DMC and the Beastie Boys. This band is genre bending, highly visually entertaining, funny, and best of all, can really PLAY. All their eye catching, crowd-pleasing stunts are backed up by incredibly solid musicianship and real groundbreaking playing.

The band continues the tradition today with a great line-up of players that includes Juno Award winner Richard Underhill -sax & vox, Perry White and Kelly Jefferson – saxes, George Koller – bass and Stich Wynston – drums.  They just released a new CD ‘Clusterfunk’ in 2012. The CD features 12 new compositions that will be sure to please long time fans and new listeners alike.

The Shuffle Demons released 8 albums and 7 videos in their 29 year career. They played 1000s of shows at every major jazz and folk festival in Canada during 20 Canadian tours. They toured Europe 15 times playing from Estonia to Italy, from the Netherlands to Norway, from Switzerland to Sweden, from Germany to Belgium, the Yokohama Jazz Promenade (Japan’s biggest Jazz Fest), on the Barenaked Ladies Ships and Dip Cruise, at the Bangkok International Festival of Music and Dance, at the Taranaki Arts Fest and the Dubbo Jazz Fest in New Zealand and Australia, the Jarasum Jazz Festival in South Korea, the Zacatecas Cultural Festival in Mexico, the Beijing Jazz Festival, and in India. And all the while they kept audiences excited, dancing and smiling as they built up a solid fan base that to this day will never forget the music and the antics…stopping traffic with the famous ‘Spadina Bus’ walk around, playing a Mingus tune and really meaning it, thrashing around the stage in crazy interpretive dance, delivering the classic poem ‘What do you Want.’