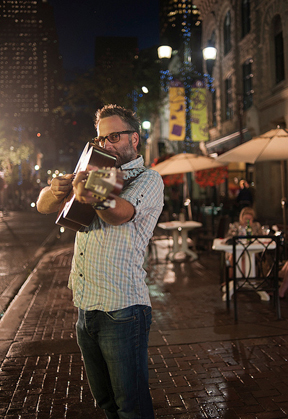 This will be a very exciting show, not to mention, our very own Kevin Haughton, will be accompanying Wil on the drums.

C.R. Avery
Whether performing to thousands at the Royal Albert Hall or the lucky few who made it inside the packed past capacity speakeasy, C.R. Avery is a unique, raw and dynamic performer. His genius lies in many genres – blues, hip-hop, spoken word and rock & roll. He is a one-man band, but one for this generation; with the rare ability to sing poetic verse while beatboxing simultaneously while pounding the piano and adding harmonica like a plot twist. A multi-talented front man for his Legal Tender String Quartet; a crazed lead singer/harp player for his rock & roll band The Special Interest Group; a lyrical dynamo & the musical backbone of the spoken word trio Tons of Fun University.
Whether playing in front of thousands on the folk festivel circut or in a small cafe in Berlin or Edinburgh, C.R. Avery is a unique and electrifying performer. He simultaneously beatboxes, sings, plays harmonica and a Herbie Hancock 80s style red rocket keytar. Having drawn from a well of influences, C.R. is to hip-hop what Jimmy Reed was to Chicago blues; a one man traveling troubadour – but he is one for these modern times.
C.R.’s lyrical skills and vocal delivery have brought him to the forefront of the international spoken word scene. He is a past winner of the CBC national Poetry Face-Off. Scratchy, smoky, beaten by years of cigarettes and off-mike shouting in cabarets all over the world, C.R. Avery’s voice is instantly identifiable.
C.R’s lyrics come from his slam poetry pieces, honed by the merciless, sudden death, one-victor-and-all- others-cast-aside competitive nature of the slam world. As such, having been performed in front of an audience that demands both intellectual clarity and visceral honesty, competing against the very best work of the very best poets, his pieces are crafted to a necessary perfection.