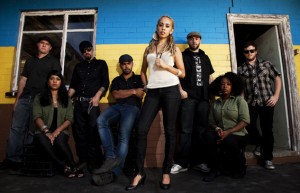 “They are the voice of the street and the band of the future!” – Carlos Santana

Blue King Brown, Australia’s premier Urban roots crew, are comin’ to conquer! With the drop of their new record WORLDWIZE Part 1 North & South, (receiving a string of 4 & 5 star reviews across the Nation) they have established themselves as one of Australia’s most engaging, unique & quality acts.
Hard hitting lyrics and groove, yet delivered in the most accessible way. Come as you are, put your fist in the Air, bounce to da beat, rock out up the front row or chill up the back. Their power packed live show is second to none & now world renowned, they’ve played across the planet, through EUROPE, UK, CANADA, USA, & JAPAN rocking crowds from Tokyo to Texas and everywhere in between.
The new album saw them working alongside the Legendary Sly & Robbie, special Guests such as Queen Ifrica & Jah Mason, engineers such as James ‘Bonzai’ Caruso (Gwen Stefani, Nas, Damien Marley, Madonna) Colin ‘Bulby’ York from Kingston, Jamaica (Rihanna, Jimmy Cliff, Britney Spears, Madonna, Michael Franti, UB40) & Chris Macro (Scribe, Katchafire).
They now bring their hot new International sound to the stage. Lead by the multi talented, relentless energy of Natalie Pa’apa’a this group is the real deal;
“Natalie is a bright light in the world with a vision that extends beyond the stage and together with the rest of the band raise the roof off every show they play. I love em!!!” – Michael Franti (Spearhead)
“BKB are one of those unique truth-telling outfits in our business that defy time. Amazing musicians with a powerful message.” Serj Tankian (System of a down)
“…One of the nation’s most refreshing voices. Natalie Pa’apa’a is sounding like a natural successor for Lauryn Hill’s onetime girl-power crown.” – Rolling Stone.