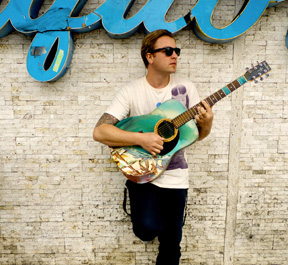 We’re in Vancouver’s Warehouse Studio. In one corner, Greig Nori is hunched over a monitor. Twenty feet away, Dave “Rave” Ogilvie is mixing a huge-sounding rock number called “Head Outta Water”, complete with gales of electric guitar, ten-storey drums, and a classic fists-in-the-air stadium breakdown. In between is Daniel Wesley, who’s beaming like a 29 year old kid, clapping his hands above his head, and bouncing off the walls. It’s not hard to imagine 10,000 people doing the same thing.

Nori, Ogilvie, and the Warehouse – this is Wesley’s dream team, in a venue that he likely never imagined would open its doors to the bull-headed, self-made singer-songwriter who pulled an unlikely phenomenon out of thin air with “Ooo Ohh” four years ago. In fact, it wasn’t until his streamlined, Dave Genn-produced 2009 effort that Daniel Wesley even considered letting another person get their hands on his music.
“That’s the first time I ever worked with a producer,” he says.” Up to that point, I was like, ‘If I work with people, it won’t be what I want.’ But I was wrong. I’m doing better stuff now at 29 than I’ve ever done. I want to keep working with more and more people, and pushing the boundaries.”

Which is what he did, turning newest album, Easy Livin, into a bi-coastal odyssey in the process. Wesley hooked up with Nori and the Bedouin Soundclash rhythm section of Eon Sinclair and Sekou Lumumba in Toronto. Back in Vancouver, he tapped his regular players – bassist Darren Parris, drummer Tim Proznick, along with Hey Ocean! bassist Dave Vertesi – for a parallel session conducted by Ogilvie.

Wesley concedes that pushing the boundaries is “also kinda scary,” but not so much that he doesn’t top all of the experimentation on Easy Livin with the insurgent, balls-out “Head Outta Water” – it’s the kind of earth-shaking power-rock song he probably hasn’t touched since he was playing basements in Langley. “All of a sudden the chorus kicks in,” he says, breathlessly, getting excited again, “and the guitars are just huge, and I love it. Songs like ‘Argentina’ – the introspective ones – nobody will be too surprised by those, but I really want to push my limits, and my band’s limits. I think people will be happy that I’m starting to make music like this. I said to Nori, we should release a full-on rock record in, like, six months.”

Don’t be surprised if he does. Daniel Wesley is entering a period of peak creativity, and he has the resources and energy to see it through. If we only sit back and let it happen, then everybody wins. You’ll be bouncing off the walls, too.

Kim Churchill’s style is explosive, with intricate fingerpicking, percussive beats on the body of the guitar, and two-handed tapping intertwined with an earthy stomp box, powerful harmonica melodies and soulful voice. His songwriting reflects his coastal lifestyle – growing up on the East Coast of Australia, with the surf at his front door – and his new nomadic life on the road.

If you have had the pleasure to see Kim before it would be memorable. He was last in the Comox Valley performing at 2011 Big Time Out crooning us.