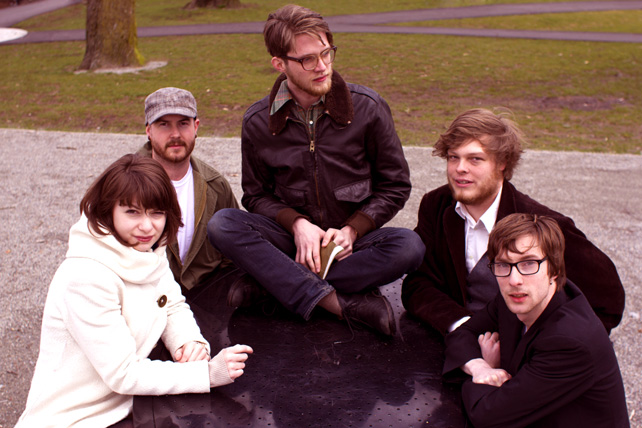 Fish & Bird were once Victoria’s most promising folk duo, and over the past 3 years they have evolved into Canada’s most unique folk-rock ensemble.  Their music hovers somewhere in the void between Newgrass and Indie-folk.  If the Avett Brothers and Chris Thile’s Punch Brothers’ parents got married and they all became step-brothers, they might sound something like this.

Folk is kind of the idea but nowadays kids get their records from all over the place.  Bluegrass, Country, Art-rock, Jazz, the Beach Boys…. these individual influences come out if you listen for them but the strength is in the blend.  The songs get you in the heart and the music screws with your brain.

Fish & Bird started as a recording project.  In 2007, when Adam Gray and Taylor Ashton went into Iredale-Gray’s basement studio, put together recordings of a few of Ashton’s quirky folk tunes, made cases out of recycled file folders, and labeled them “Fish & Bird” (with homemade rubber stamps) the sound was a local hit in their hometown of Victoria.  In 2009, they released a full length album of more mature material called “Left Brain Blues”.  Veda Hille has a copy and she loves it.  The pair represented the tunes as a two-piece for a long time but when they became five is really when the sound started to come together.

The band has graced dozens of summer festival stages, and done over a dozen multi-province tours.  This edgy ‘new’ folk has gathered fans across the country and we are excited to finally see them up in Cumberland.