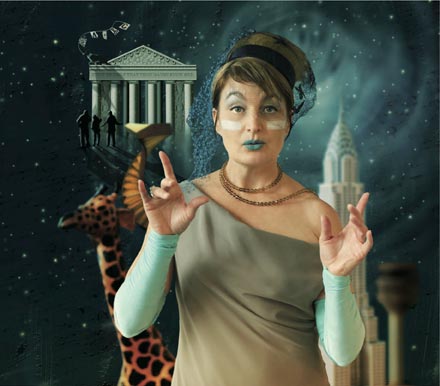 A superstar of the imagination with a passion for the truth.

In 2006, Jane Siberry let go of her home and most of her possessions and began a new journey of “living her to-do list.” At the same time, she let go of her name and became ‘Issa.’ She described the impetus as “change or die.” Now, three years later with many strong changes under her belt and feeling more enthusiastic about life than ever, she has pulled her past name forward again is full on ‘Jane Siberry.’

MUSIC RELEASES
At the time, Jane started writing and recording ‘one song per studio day’ in Brussels, Australia, the United States and Canada not knowing what her career would be as a musical being. The result is a collections of songs that are being released as three separate CDs telling a ‘Scherezadian’ story that will come to an end on the third installment.

The first part, Dragon Dreams, was released in November, 2008.
The second part, With What Shall I Keep Warm? was released in November, 2009. With songs about canoes trips, trains and marriage proposals, Jane describes the first CD, Dragon Dreams, as “the welcome sign and front door” of the trilogy. The new release, With What Shall I Keep Warm?, invites the listener into her “living room” where the conversation takes some unexpected turns. From ‘Eden (Can’t Get This Body Thing Right)’ to ‘Then We Heard A Shout,’ the songs are portraits of the human condition in all its mysterious glory.

With What Shall I Keep Warm? also includes two long-requested favorites: ‘In My Dream’ and ‘Walk On Water.’
Continuing in her role as a self-produced artist, Jane is joined by her musical friends in telling the stories. They include John MacAr- thur Ellis (Canadian producer, guitar/pedal steel); ‘Betty’ (her fierce NYC girlfriends); Marlon Saunders, Leslie Alexander, Cath- erine Russell, Gyan and Gail Ann Dorsey on vocals; Rich Brown on bass; Christine Kim, Pauline Kim and James Roe on strings and oboe – to name a few.

SELF-DETERMINED PRICING STORE
In an unsettled and unsettling world, Siberry continues to re-think her role within it as a musician. This has created an odd assort- ment of achievements. Of particular note is her online store, Sheeba, which has been a curiosity in the music industry since 2006. Customers have a choice of market price, ‘self-determined’ pricing, or pay-it-forward (gift from artist).