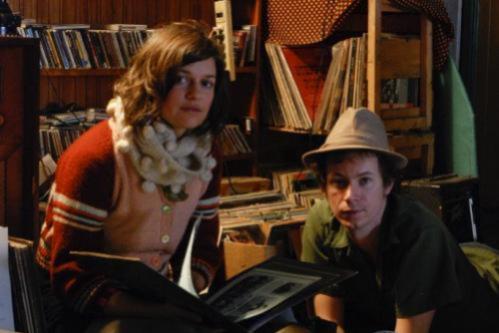 Advance tickets are on sale now at the Museum for $12 ($15 at the door). Youth under 18 are FREE but you must pick up your youth tickets in advance to ensure seats are held for you. Pre-show reception will take place at the Cumberland Museum with doors to the Church opening at 7:45. To reserve call 250-336-2445.

Morlove fills the United Church with their musical magic

Morlove is the breathtaking collaboration of songwriter, multi-instrumentalist and producer Corwin Fox and folk-pop singer-songwriter Miss Emily Brown. The two blend vintage keys, guitars, mandolin and hushed vocal harmonies into intricate, acoustic folk songs that are touched by engaging and unexpected pop nuances. Morlove was born around the campfire of the 2007 Artswells Festival in Wells BC. Brown and Fox complement each other beautifully, brushing gently against each other as writers and tastefully restrained singers.

Nominated for the 2010 Polaris Prize, Morlove’s debut album All of My Lakes Lay Frozen Over is a collection of evocative folk-songs ranging from hushed vocal harmonies and delicate strings to explosions of horns, pulsing pianos and choirs of banjos in unorthodox time signatures. Recorded in snowy Wells BC, All of My Lakes features borrowed instruments from local attics and salons – including sousaphone, player piano, pump organ and typewriter – relics of the 1930’s gold-rush town.

Exclaim! Magazine has called All my Lakes Lay Frozen Over “evocative yet mysterious, presented in high-range voices that are practically angelic.” The album includes jazz and postrock leanings within things like “Old Perfume,” and “When You Come Down” has the frontier shuffle of Calexico coursing through it. All told, there’s a unique depth to Morlove’s debut record,which sidles up to the edge of the unknown abyss, with its palm safely grasping the handrail. “

Morlove is currently working on their follow up album, a project based on the theme of Pattern. They have just returned from a residency at the Banff Centre for the Arts where they began exploring the possibilities of collaborative songwriting. They are touring this fall with a talented new string section featuring Hannah Epperson (violin) and Christina Zaenker (cello).

This very special concert event will take place Tuesday October 18th at 8 pm in the acoustically stunning Cumberland United Church and is presented by the People’s Museum of Cumberland (Cumberland Museum and Archives) as part of their new “People’s Music” Series. Advance tickets are on sale now at the Museum for $12 ($15 at the door). Youth under 18 are FREE but you must pick up your youth tickets in advance to ensure seats are held for you.