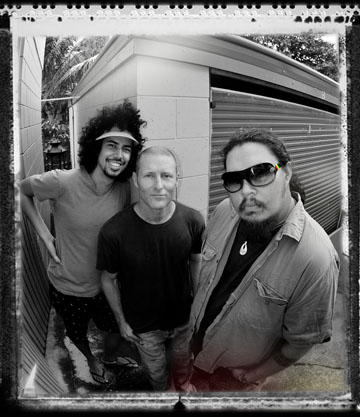 Here is a collection of words that OKA put to together because they always get asked to describe their music: “a fusion of eclectic world sounds, roots, dub, reggae, jazz and organic electronica”… yep it’s a lot of words. My favourite description though comes from a new Oka fan in Canada: “I have to say, your music is like nothing I’ve ever heard. love it! techno-folk-aboriginal-jungle-hippie-rock? damn.”

Following four previous album releases their latest release,OKA LOVE shines an optimistic light on the beauty of Indigenous cultures, in a progressive style. Phatt organic earth rhythms in a smooth hi-fidelity sound that is full of uplifting melodies, tones and textures, all cooked over raw didgeridoo rhythms and dance driven grooves. The album recorded by Stu and Chris in their own studio in Coolum, came to life after the songs evolved from the bands extensive touring.
OKA LOVE is a celebration of Australian cultures, sinking deep into the roots of the Asia Pacific region. The OKA sound is deeply rooted in the laid back coastal style of their home.
Their signature is a smooth hi-fidelity sound that is full of beautiful uplifting melodies, tones and textures cooked over raw didgeridoo rhythms and phatt dance driven grooves.
A live collective where no two gigs are the same, the OKA flavor is their own hybrid of feel good Roots, Reggae, Dub and Jazz, marinated in Electronica and served on Island Time.
They have independently sold over 60,000 albums worldwide, a true testament to their ever growing appeal to people of all ages and cultures. It’s the kind of sound you spread the news about with an almost missionary fervor.

OKAs hypnotic, high energy live performances are a spontaneous exploration into the sublime. They consistently set themselves apart as a festival crowd favorite with their originality, honesty, and passion.
The band are easily internationally transportable. Technology and years of refinement mean they can tour their massive sound with no compromise or excess baggage costs.