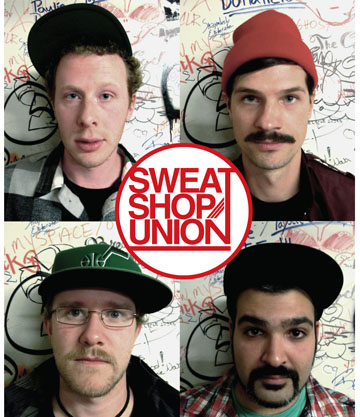 Sweatshop Union is the undisputed heavyweight of North Western hip-hop, and has earned a reputation as the hardest working collective in the region. Having performed over five hundred shows internationally, their live performance has become a mainstay of Canadian music.

In 2002, a concept album was recorded called: Sweatshop Union. The record was released internationally on Battle Axe Records and the new group began their relentless touring schedule that has proven to be a key catalyst in their success.

The next three records solidified Sweatshop Union‘s presence in rap music. The group co-signed to EMI and went out on the road touring with the Black Eyed Peas, Swollen Members and the Living Legends as well as opening shows for Snoop Dogg, De La Soul, and The Roots. Both college and commercial radio gave the albums substantial airtime and soon after came nominations for Juno Awards, a Canadian Radio Music Award, Much Music Video Awards and more. By 2006 Sweatshop Union had begun headlining shows in the U.S. and appearing at major festivals across North America.

Last year URB magazine featured them in their next top 100. They’re not alone in thinking that Sweatshop Union is a band worth keeping an eye on. Their consistently poignant music continues to become more relevant daily and the group shows no signs of slowing down.

Currently, their dedicated fan base is enjoying the recent releases of both Sweatshop Union’s Dirty Circus and Pigeon Hole. Also, almost finished is the long awaited fifth release in the Sweatshop catalogue. The EP comes packaged with a DVD and will be released this winter.