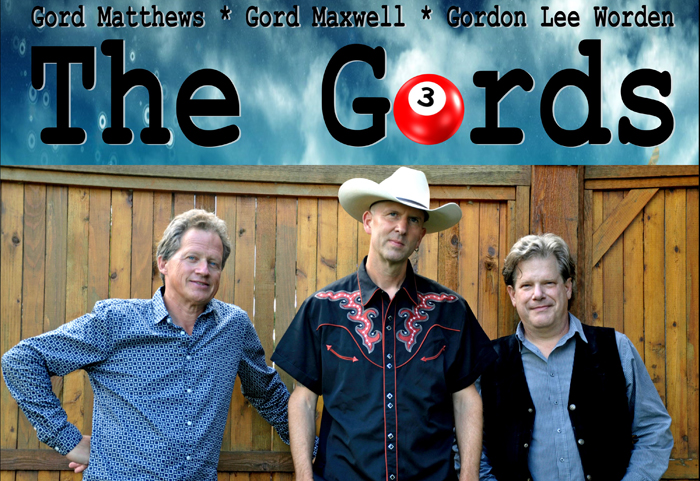 Tickets available at Bop City, The Waverley Hotel, by phone (250) 336-8322 or online at cumberlandvillageworks.com

This band is all about the music. #1 on the Roots charts for 36 weeks and all are alumni of the legendary Ian Tyson. Gord Matthews was a member of kd lang and The Reclines.

Gord Maxwell, Gord Matthews and Gordon Lee Worden are an adult-contemporary / soft rock vocal band made up of veteran sideman/session musicians. All three Gords are gifted singer-songwriters who offer a truly remarkable rich sound. They combine a natural vocal harmony blend, two standout guitar players, a driving bass player – 2 of which double on keyboards, and drums with songs designed to remind listeners that it is still possible to find a musical alternative to dance remixes, mp3’s and “idols”.

All three Gords are alumni of the legendary Ian Tyson. Gord Matthews and Gordon Maxwell served together from 1998-2008, appearing on the “Lost Herd“,” Live At Longview“,” Songs From The Gravel Road” and “Yellowhead To Yellowstone” albums. Gord Maxwell and Gordon Lee Worden are still recording and touring with Mr. Tyson. And, The Gords’ producer, Tom McKillip, also spent a couple of years as Ian Tyson’s guitarist.

Gord Matthews was a member of kd lang and the reclines from 1983-1990. He appeared on the albums “A Truly Western Experience“,” Angel with a Lariat” and “Absolute Torch and Twang“. While with kd, he played many high profile shows including David Letterman (twice), Saturday Night Live, Austin City Limits, The 1990 Grammy Awards and The Tonight Show with Johnny Carson (five times!). His solo album “The Third Best Thing” is currently available online.

Gord Maxwell was the lead singer/bassist in One Horse Blue, and wrote their songs “Colors Of Love“,” Baby Don’t Cry” and “Hopeless Love” which became the first independent single (Savannah Records) to reach number one in Canada. He is a first-call session singer, appearing on the albums of Ridley Bent, One More Girl, Lisa Brokop, Aaron Pritchett, Rick Tippe and Duane Steele as well as on many commercial jingles.

Gordon Lee Worden has played alongside Nick Gilder and Sweeney Todd, Sue Medley, Mike Reno, Barney Bentall, Brad Johner and Lisa Brokop. He has appeared on recordings by Crusoe, The Travelling Mabels, Babe Gurr, Aaron Pritchett and Ian Tyson. He co-founded The Great Wide Open with Mike Norman and Chris Aiken in 1998 and has performed extensively in Europe and Asia.