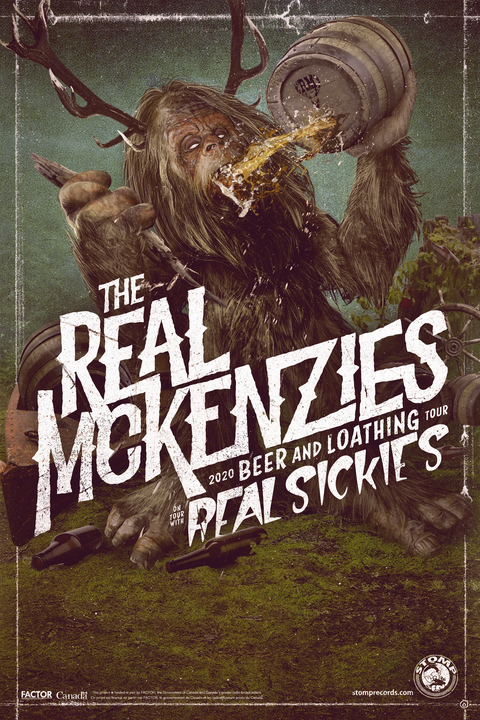 The Real McKenzies storm the Waverley hotel on their Beer and Loathing 2020 Tour with guests, Real Sickies

A BRIEF HISTORY OF THE REAL MCKENZIES

Paul McKenzie claims he had a epiphany when he was subjected to an Andy Stewart record which was playing in one room, and intertwining with the vulgarity of a Sex Pistols album emerging from another. That year was somewhere around 1992, the setting was Vancouver Canada,and McKenzie was looking for something new, since his band TT Racer had recently disbanded. Who would have thought that a great deal of fun could be had pilfering your parents closet of old kilts and high socks to wear on a stage on which you would perform cover songs of various bands, altered slightly, to fit a scottish theme. Example: I Wanna Be Your Scot as opposed to I Wanna Be Your Dog. You get the point. Someone probably joked, If were gonna wear kilts, we might as well have a piper too.

While certainly not a new angle in rock music, the bagpipes were only ever used in a couple of songs at most by various bands, never a mainstay of an entire set. Soon though, it was apparent that this was a distinctive sound that could be finely tuned, with the soaring pipes complimenting the ferocious electric guitars and vise-versa. Of course the first thing that springs to mind is the word gimmick. Sure, I guess thats applicable here. But before you go taking things way to seriously, lets also not forget the concept of show business. People annually spend a shitload of money for the sole purpose of being entertained. So why not go out of your way to be entertainment? That was all a moot point with the McKenzies anyway. Because they just wanted to have fun, and you are more than welcome to have fun with them, as hundreds of thousands have. Sure some will read too much meaning into the whole idea, and take it out of its realm of fun, and those people should just shut the fuck up and drink their beer.

14 years later, the Real McKenzies have achieved legendary status. Their live shows are highly regarded and they have been known to leave large audiences choking on their own dry mouths. They’ve been influence to more than a few bands, and ironically have been accused of ripping those same bands off, usually by journalistic hacks on the internet. They’ve toured the world endlessly, and frightened more than a few people at times, but it’s a small percentage to the numbers of people who leave their shows with ear to ear grins and think about the great time they had for weeks to come. I can imagine it will take death to stop these guys from doing what they do best, and that’s kicking your ass in the face at each and every show they play.

The year was 2014, the place was Edmonton and the mission was simple. Spread the highly infectious pop punk contagion to the four corners of the earth and beyond. And, just like that, the first wave of Real Sickies was unleashed. A steady stream of demos and EPs quickly established the Sickies as a local virus to be reckoned with. The band fiercely escalated their fever pitch plans of world domination by sharing the stage with heavyweights Stiff Little Fingers, Subhumans, The Real McKenzies, Giuda, Mean Jeans and The Jolts just to name a few. A couple near disasters almost put the Real Sickies out of commission. Lead singer Ben ironically got real sick and required spinal surgery while a couple of founding members stepped down. This would usually be enough to sink any band; but Ben bounced back like a champion, new members stepped up and Real Sickies released their phenomenal debut album “Get Well Soon”. The band immediately shot out on tour making house calls across nation as many new fans happily succumbed to the sickness for the first time.

And now Real Sickies are launching their pop punk pathogen straight into the final frontier. “Out Of Space” is thirteen rocket-propelled, turbo-boosted, NASA-disavowed tracks of incurable, infectious bliss. Clocking in around thirty minutes, the latest album blasts the patient into orbit with plenty of sweet singalong choruses, blazing down-stroke riffs and enough whoa-ohs to infect even the most jaded extraterrestrial. Real Sickies will be invading a town near you this fall. Until then…Stay sick!