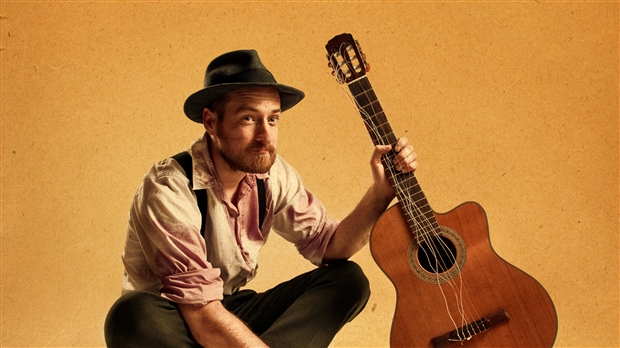 Wax Mannequin continues indefinitely to bring his timeless brand of strange folk and absurdist pop music to the far reaches of the western world.

Strange-folk phenomenon Wax Mannequin is well-travelled. He has crossed a wide range of terrain — both sonic and physical — this decade past. Through his catalogue of secretly renowned recordings and his riotous live performances at countless venues and festivals, Wax continues to bring his essential voice and vision to both sides of the Atlantic. His legend grows through word-of-mouth as his music is passed from hand-to-hand — his influence trickles down from the minds of wayward kindred souls, insidiously seeping into the poetic heart of this country.

Wax Mannequin has recently released his sixth record ‘No Safe Home’, and has once again abandoned the trappings of his newly domesticated life in favour of wayward travel. In this hauntingly spacious, sparsely produced acoustic record, Wax uses his raspy and road-broken guitar to provide a thoughtful glimpse into the psyche of our age, or at least into his own paranoid yet endearingly self-aware interpretation of our place and time.

While his personal idiosyncrasies, lyrical depth and other-worldly melodic sensibilities have kept Wax Mannequin safely out of mass-appeal, they also make him impossible to dismiss or forget. With a name that is whispered with bewilderment and reverence in art galleries, garages and rock pubs throughout Canada and Europe, Wax Mannequin continues indefinitely to bring his timeless brand of strange folk and absurdist pop music to the far reaches of the western world.

Corwin Fox is a Canadian songwriter, producer and multi-instrumentalist who has been hailed as “a shining light in Canadian roots music” by Doug Cox (artistic director, Vancouver Island Music Festival). Known as much for his studio expertise as his live show, Corwin has toured extensively across Canada, the U.S. and Australia performing his songs on banjo, guitar and ukelele. He has played venues and festivals large and small, some by himself, some with his band Morlove, and some with such luminaries as Fred Penner, Shane Koyczan and the Short Story Long, Alex Cuba, Kim Barlow and Raghu Lokanathan. Corwin continues to write, record and tour, although the bulk of his time is now gladly spent in his studio and hanging out with his kids.